The only air purifier to produce completely clean air based on their testing as described below!

The goal was to find the purifier that produced the cleanest air. The Oransi was the only purifier to produce totally clean air. As stated by Dr. Fred Stutzenberger, PhD at the lab, "You can be justifiably proud of your product."

The picture to the left shows the results. Petri dishes captured the particulates coming out of each air purifier. The cleaner the petri dish the better the filter. The other air purifier results are in A, B, and D. The Oransi air purifier is C.

Only the Oransi removed all particles (ie a completely clean petri dish). This is representative of cleaning the air of bacteria, mold spores, pollen, pet dander and dust.

The test was conducted by holding a sterile Petri dish in front of the exhaust of each air purifier. This was done for a stopwatch-timed 5 minutes. The Petri Plates were closed and taped. Then incubated for 3 days at 37 degrees Centigrade. The comparison of microbes exhausted by each unit is shown in this image.

Here is a snapshot. 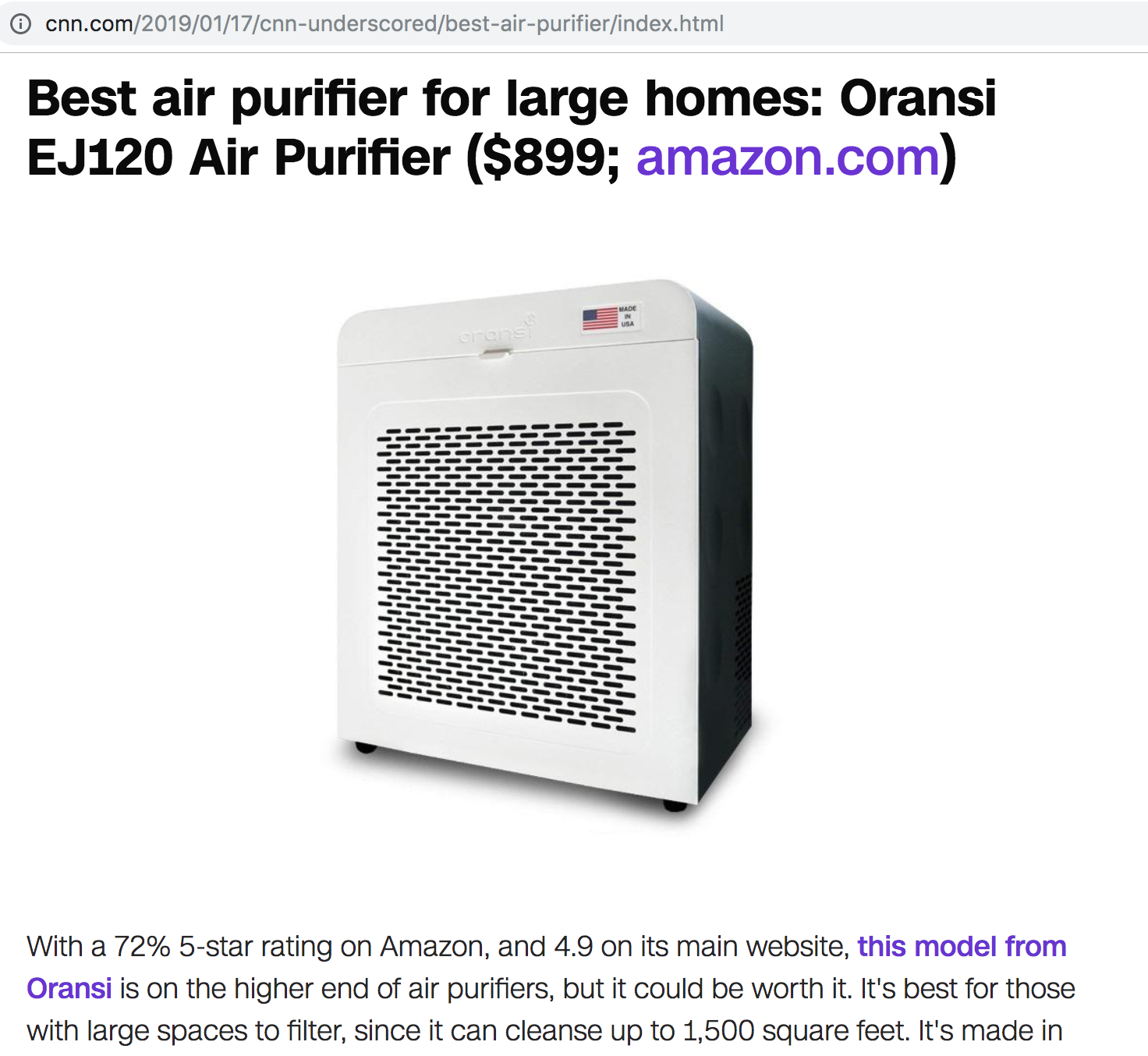 Modern Castle tested the EJ120 air cleaner through a series of real-life tests in a home with a particle counter.

Here is a summary: "The Oransi EJ120 utterly crushed our air purification tests. Within 1 hour it was able to reduce PM2.5 to 0.1, PM10 to 0.0, and reduce AQI to 0. The build quality is impressive, with quality metal / plastic parts, a German EC motor, and a thick filter stack. Its purifies the largest space we’ve tested to date, handling up to 1,250 square feet."

Here is a screenshot. 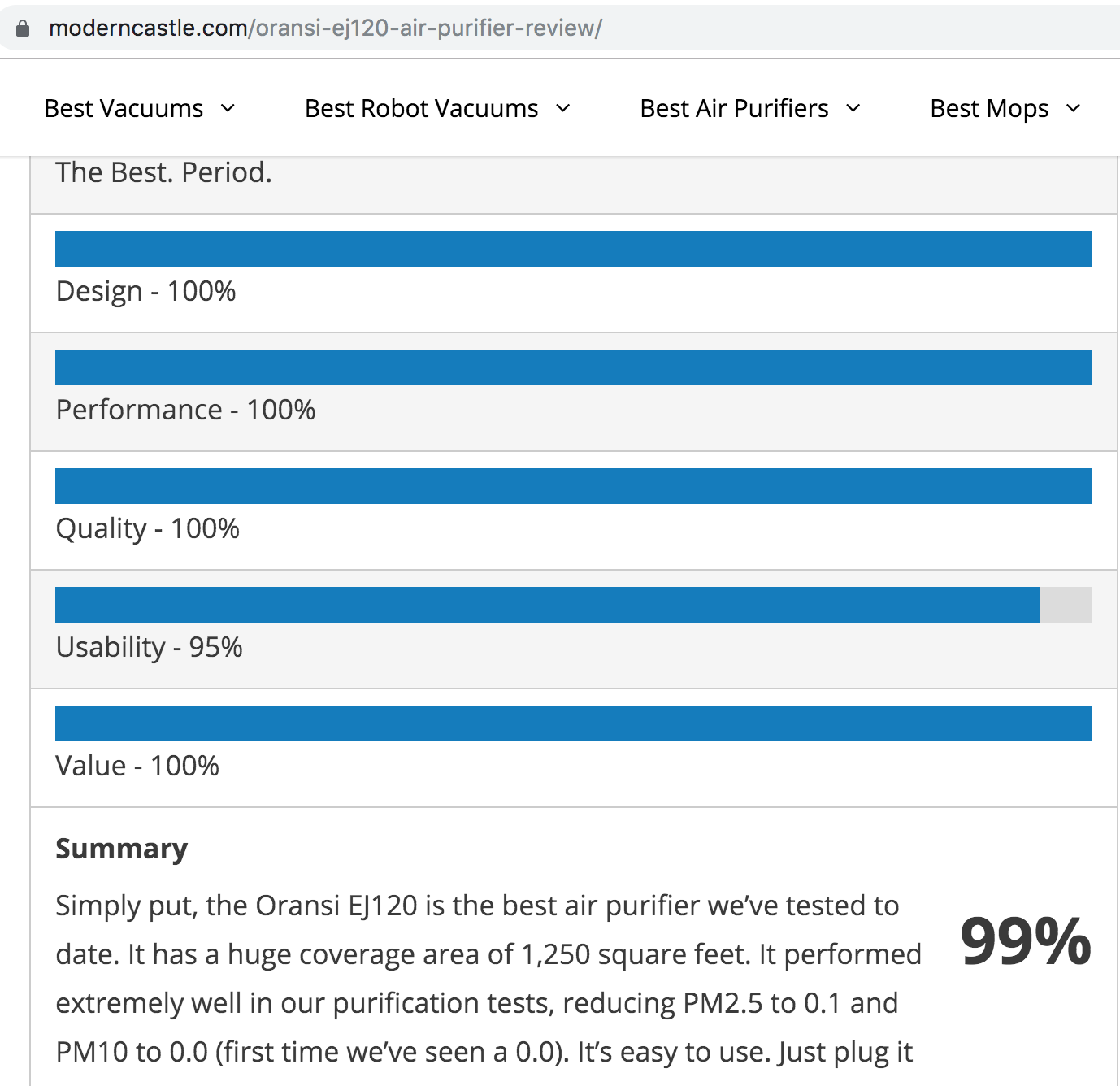 The Tesla of Air Purifiers

We were so honored that Huffington Post featured Oransi as the air purifier solution for air quality issues.

Here is an excerpt: "The design is sleek, as well, making it a solid option for nearly any wellness follower and a state-of-the art testament to how technology can actually support good health."

Here is a screenshot. 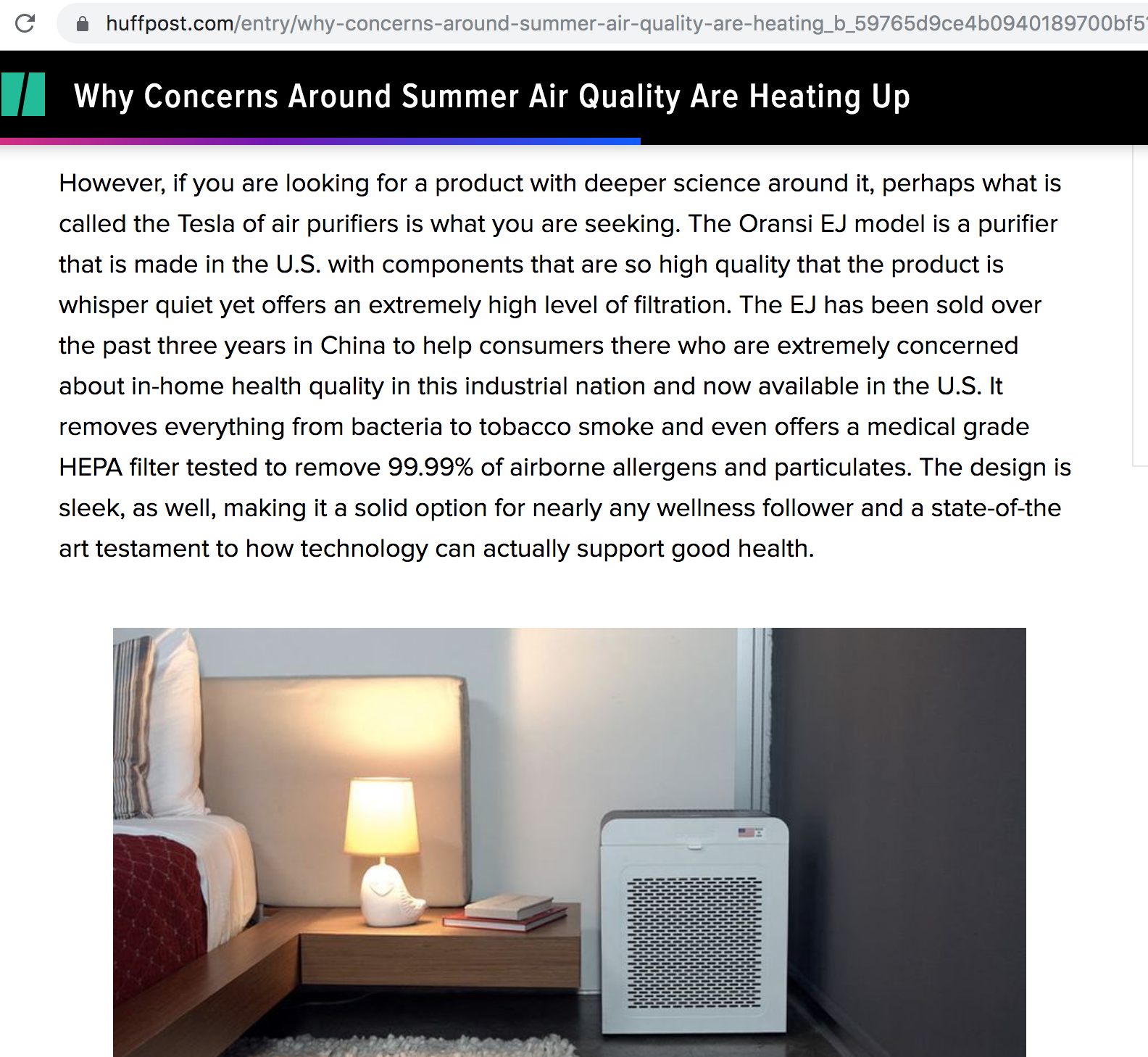 We were happy to see that Women's Health Magazine recognized the importance of a high CADR to ensure you are getting the cleanest air. They showcased our EJ air purifier and stated "it covers a larger area than most purifiers - so you'll need fewer units if you're aiming to freshen up your entire home."

Dr. Bob Martin is a leading expert on healthy living. His radio program is broadcast to over 400 stations. He calls the Max air purifier "the best air purifier you are going to find".

The particle counter takes 30 to 40 seconds to calibrate. So the numbers you see at the end of the videos reflect the air that is coming out of each model.

Ideally, the numbers should decrease with this test. The closer you get to zero (ie 100% particles removed) the cleaner the air is coming out of the air purifier. 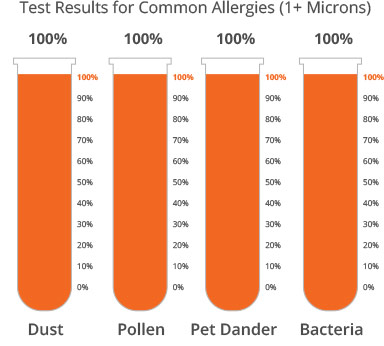 Independent test lab results for the EJ120 measured at 0.3 microns.  The results are above the standard for a true HEPA filter.

Here are the certified CADR numbers for the EJ120: 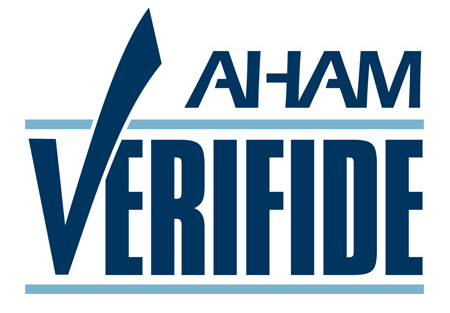 The EJ120, has a coconut shell based activated carbon filter that has been specially treated so it can adsorb a wide range of gases, VOC’s and chemicals. See this page to see the gas test results

Discover Which Air Purifier Is Right For You

In just 3 simple steps you'll find the right air purifier for your needs.